After the meeting of Georgia, she leads me to meet the other volunteer from italy,  walking over to a girl in sunglasses and looking tired we get introduced.  In all honesty I didnt know what I expected when I read Nunzia’s name on the email.  But from first few moments she seemed interesting.

Georgia led us up a few flights of stairs (yes im not mentioning that I almost lost my jacket and some guy had to bring it to my attention that I dropped it).  We  get told that we need to get ticket from Metro Ticket Station and it will cost  5 Euros.

We get to the platform and a welll grafited train arrives and we board and sit on some empty seats.  Looking out the window as the train sped to centre of Athens.  Georgia tells us abit about  Elix and about what we will be doing and other stuff.  Outside we sea loads of random olive trees alot of houses that look well best in English would be grotty.

After about an hour Georgia tells us we are getting off to get the trolley bus.  So we get up and walk the many stairs up to Syntagma.  She points out the parliment building and the main square, we walk towards a few stalls and a Kiosk style building that was in actuality a kiosk.  Of course this point im thirsty and looking like a tourist, actually we both were.

We get to the bus stop just behind the kiosk and are told what buses take us near the house and whats the “best”.  After a small wait we board a yellow bus that has turned up, a trolley bus: 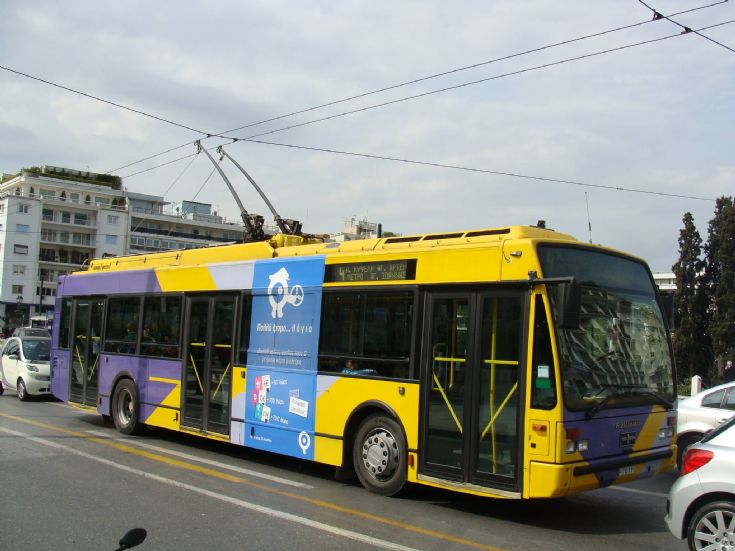 After what felt like hours on the bus, we are told its time to get off.  We get off the bus into well a suspicious looking street, in an area known as Kypseli, alot of appartments that meet the “grotty” criteria.  Nunzia turns to me and tells me that she does not speak English well, I smiled and said “same with me”

We arrive at an apartment, grey on the outside, a few minutes from the bus stop, and Georgia opens the door, we slowly walk up the three flights of marble stairs and arrive at a door where she rings the bell.

The door is opened and we are greeted by a blonde girl, Northern European, who introduces herself as Jaana from Estonia.  In all honesty I was thinking much about anything at this point except to get my bag off and have a seat.  After a quick tour of the house and seeing my room, I then met James another volunteer at a project called Anima, now as James is English I did have to ask the important question, one that would save alot of arguments, does he support independence for Scotland … luckily he answered correctly!

We are then told that there is a farwell party for one of the volunteers Bruno from Mexico nearby, after some dicussion we agree to go.  We get onto the bus to the nearest metro station, Victoria, and get off the metro at Monstraki, where we walk left and down a dark alley that is a famous flea markert.  We arrive at a pub that has a nice mural going up some stairs

I will admit when we got seated and met the people we were looking for it took me a few minutes to get my thoughts together as the view was stunning, from where we were sitting we could see all lit up the Temple of Hephaestus, the only complete temples of its time in Greece, oddly Hephaestus was the god of Metal Working and Craftmanship.

Arriving a few hours later at the flat I was tired as it had been a long day and alot had happened, 3 different countries, alot of new people and many new experiences, and this was just on the one day.

Next time on Bryan Deakin.com Greece Blog a look at the following week and meeting new people!

Hello and welcome to my site, my name is Bryan Deakin, 35yr old from Scotland. A Dyspraxic, Poet, Blogger and Community Activist, I studieda BSc(Hons) Sustainable Development, at the University of Highlands and Islands. Lover of all things Greek and Finnish, and a keen and active member of Falkirk SNP. Prior I was Vice President of Simple Machines, and Project Manager at Simple Machines Forum (SMF).

View all of Bryan Deakin's posts.

This site uses Akismet to reduce spam. Learn how your comment data is processed.